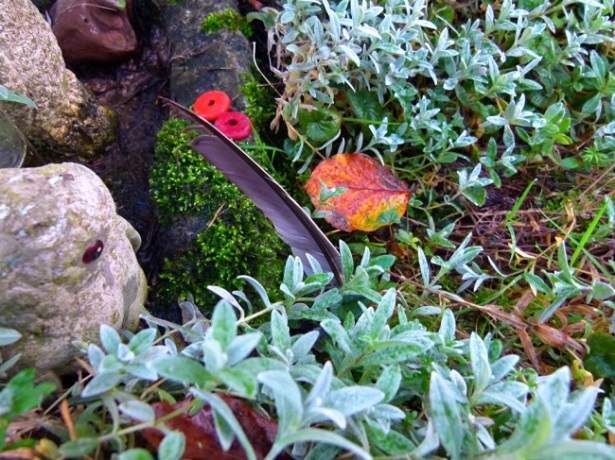 “Why did they leave these things here?” Farrow scratched his head with a sharp talon.

Farrow glowered at the brown excuse for a mate. She lay good eggs and she did not complain when the worms he’d brought home to the nest were torn or half-eaten. He had to give her that. But she never did learn to keep her beak shut when rhetorical questions were posed. Where someone with a bigger birdbrain would know to quietly wait for him to impart wisdom, she thought she had something to contribute. It was exhausting.

“There is no such thing as decorations, Ferrolina,” he attempted a didactic tone, perched atop the side of the nest and peering downward at the log below them. “All actions have a reason, and even those that end up beautifying have another motive underneath.”

“There’s moss underneath,” she quipped, egging him on.

Oh, she knew he held himself in puffed regard and thought the lesser of her. He could be tedious. But she had the best nest location in the area, and his pride meant he could not let her (or the offspring, when they hatch) go hungry. It was enough. And under all his bluster he was not cruel, only vain. Better than the lowlife who’d left her mama half starved and the lot of them freezing in an exposed nest when she was growing. Two of her nest-mates hadn’t made it, and the dud was unceremoniously rolled out to splat frighteningly to the distant ground. None of that was going to happen to her four egglings. And she was adamant all four would make it. She knew it in her heart that none were duds.

He narrowed his eyes at her. Sometimes he thought he’d detected some snark mixed in with her idiocy, but her expression was so mild he determined it impossible. He must be putting wit where there was naught but simple-mindedness.

“Yes, there is moss there indeed,” he noted, as patiently as he could muster. Mates were a lot like younglings. You couldn’t fault them for what they did not have. “Some concepts are too difficult for females to understand. You are better suited for the nest, to concentrating on keeping the offspring warm.”

Ferrolina swallowed a chirp. He was so easy to poke. “They sure are pretty to look at,” she added. “But they will not fill tummies.”

Farrow straightened. It was his expression, oft repeated, that she had finally managed to internalize. It deserved a reward. “Indeed,” he nodded his head and preened a moment. “And I shall be soon back with something that will.”

Photo by Paolo Nicolello on Unsplash

[For Kathryn: you became light eight years ago today. We all loved you. We all love you more.]

Where the green grass ends

And the ocean grows

Is where she lies

As it lifts the

(and for Kathryn, in my mind’s eye)

“He’d left it that way on purpose,” the late owner’s grandson pointed.

Sarah regarded the old fence with its mossy stains. Bushes crowded near and the trees grew so close they’d soon be integrated into the fence. A thorny climber threatened to lock the gate from within, and she wondered how many times it or its predecessors had done so, how many times it had been gently pruned to keep the portal functioning.

“For a trellis?” she bent her knees to peek out through the slats on the ladder-like bit of fencing adjacent to the gate. The front of the property was fenced in stone. Only this portion in the rear was wooden. She almost liked it better. In her mind’s eye she saw roses. Or sweet peas. Or jasmine.

“Old blood feud with the neighbors.” The man explained. “But he loved their daughter.”

Photo by Eric Muhr on Unsplash

She was not a country bumpkin

Though she aspired to

So she dressed the part

How to walk and talk

And she hoped to look

To the folk stopping

For the dVerse quadrille challenge: bum

They didn’t think they’d leave such an impression. After all, they were only passing through, a transient band of transients in a town built on foundations set in stone.

And yet, as they left, colored wagons clattering on paved roads not made for wooden wheels or tender hooves, they were followed by a line of children.

Like a piped piper for the unloved. Seeking a better home.

“You cannot avoid her forever,” Mom’s sewing barely paused as she cut the thread and got another length through the eye of the needle, “not when Alice lives but an arm’s length away.”

I hunched miserably over my own sewing, the tip of my tongue lodged against my teeth where it would not show but can still provide me some security. The ‘hidden’ stitch kept sprouting comas of thread on the side of the hem one wasn’t supposed to notice any. I was hopeless at needlework. Mom still insisted.

I avoided you finding safety pins in my hem, I thought to myself, and our cramped quarters allow even less than arm’s length.

I shrugged. Mrs. Munster’s house bridged the alley. She was a dragon, but I just couldn’t face Alice. I was too ashamed.

They found the photo in his wallet. No address on its back. No date.

“This could be anywhere,” Deena said.

Neal sighed. He hadn’t seen Dad for years. The reclusive elder had been an aloof parent, and while Neal had yearned for more connection, it always took so much work … with scarce actual return.

“I know where it is.” Aunt Leah fingered the yellowed photograph. “It’s the Mendelsons’ house. I always suspected he and Meir had a thing. Such secret it had to be.”

She sighed and shook her head. “Such a shame. To have to hide love this way.”

They never did make it back from their destination. Not for lack of trying. Not for lack of plans. Not even for lack of courage or stamina or all the things that make a journey circular. There and back again. Like Bilbo Baggins looking for an adventure and finding more than he had bargained for (or perhaps precisely what he needed); they, too, found more along the way than they had intended.

The path slowed everything. Time turned to stone.

And when it was over, said and done, it was a time and there was never enough of it.

They took too long.

So much that life passed by before it could lead them back to where they had come from.

Only that unlike Bilbo, they did not return to their Bag End.

(Prompt: from “A Time” by Allison Adelle Hedge Coke)

For the dVerse Prosery Challenge: A Time 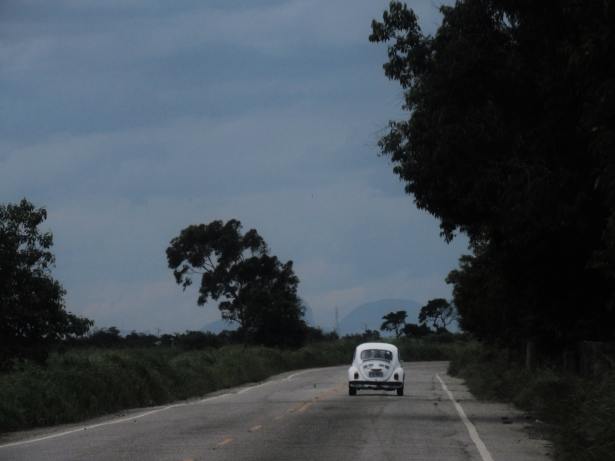 She tightened her grip on the steering wheel.

“How come he always gets the window?”

“Stop this or you can all walk home!”