“You aren’t seriously going to do that.”

One could debate which was opened wider, Bella’s jaw or her eyes. She did have enormous eyes. People sometimes said they took half her face. I used to think it an exaggeration, but looking at her now, I was no longer so sure.

“Am too,” I kicked one of the tires. Part for emphasis. Part to check the resistance.

Definitely Bella’s jaw. Definitely more than half her face.

She twirls this way and back again

Jingling beads fit for a reign 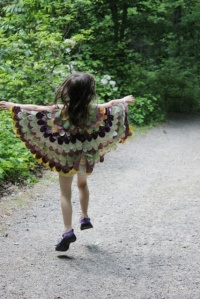 The little girl is adamant. She has made up her mind. It is final. This is what she’ll be. She’s even wearing training-wings.

It lasts about a day.

“I’ll be a batgirl fire-fightress (sic),” she announces.

A look that shows just how impossibly slow adults can get is followed by: “No, I won’t be a bird anymore. I will be a fire-fightress.”

She is deeply disappointed with me that I did not notice the colors of her clothing all in red and yellow or the swirly bracelet around her wrist that’s meant to be the hose. She’s completely done with birds and fully involved in counting fire-hydrants, yellow helmets at the dinner-table, and nighttime fire-drills.

The next time she comes she is in a tutu. I feel confident for all of five seconds that I know what she is now going to be when she grows. I should have known better. She sets me straight.

“Not a ballet dancer!” she intones dismissively, noting my apparent limitations in assessing the meaning of her chosen dress. “I’m going to be a fairy. Can’t you see this is a fairy skirt?”

She’s a skier the following week. A princess the one after. A “limpic” skateboarder (a la TV competitions she watched over the weekend). A zoo-keeper. A dentist (her mother crosses fingers for that one!).

For one moment she even considers being a speech-pathologist. Then she decides that she can do better and just use stickers and markers as the president, too. “I need them for signs so they will see me,” she lisps decidedly. “And for presents. Presidents need lots of presents because it is in their name.”

She considers a plumbing career (after their bathtub floods). Becomes a pianist when she spots a broken piano on the sidewalk and bangs a (thankfully) brief concert. She’s going to be an astronaut. A doctor, too (“to fix the aliens if they get sick and to give me medicine from tummy ache”).

There is a passing mention of a police officer or maybe a model, undecided who.

She’s a whirlwind of professions. One day she’s “for sure” one thing, and the next day for sure “not THAT!” but surely just the same another.

Her parents hold on tight and let her fly. Oh, yeah, there is a pilot era, too, complete with airplanes spinning in the park and an insistence on perching on the monkey-bars’ “top top one where pilots are.”

The jury’s out on what she’ll be when she grows up. What we know in almost certainty is that it could well be what she declared today, or yesterday, or in three different periods during the past week, or will introduce in full high drama sometime tomorrow or next month.

For now, she’s a rolodex of pure anticipation. Dress-up, here she comes!