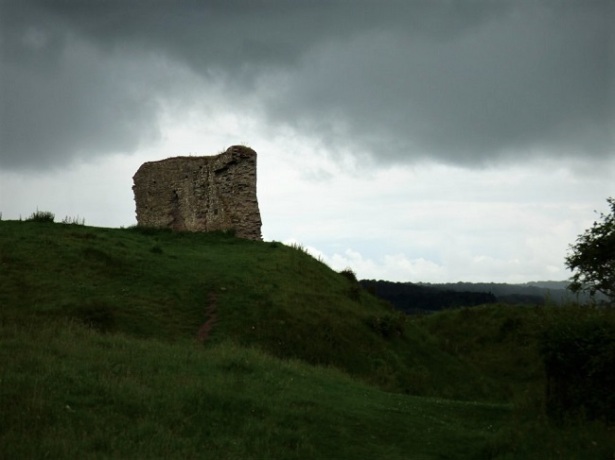 There were hollows underneath the old ruins. They could be reached through the small shadowy glen that indented the hill where the remains of the stone structure stood.

Da had said that the underground spaces had likely been storerooms, but in Konnor’s mind they could just as easily have been dungeons. People had such things in castles and forts and towers. In old times.

Or perhaps still did. You never knew what could be lurking underneath someone’s residence.

He used to go to the ruins with Baldwin. It had been their favorite play space. They’d crawl through the opening in the rocks which led to a small roundish place with hand-hewed walls that still showed marks of chisels, complete with what must’ve been a doorway to other spaces but was blocked by a tumble of large stones.

They had made a plan to clear those, he and Baldwin, once when summer was long and they were bored and needing an adventure. They were soon disabused of the notion, however. Not only were the stones heavy and the tugging of them sweaty work, but the dust that fell on their heads from the ceiling made them realize that the whole thing could come down and leave them buried.

They weren’t ready to be buried. Not when ghosts and goblins waited to grab any who stepped into Death’s domain.

So they left the rockfall alone and found that their imaginations managed to terrify each other well enough without actually discovering what hid underneath and behind the areas into which they had no ingress.

Then Baldwin got sick, and when the fever subsided his legs did not work anymore and one of his arms was weak and he became morose and pale and could no longer come play in the ruins. When Konnor came to visit him, Baldwin reclined in his bed and frowned and said that dungeon stories were stupid and for babies.

Konnor stopped mentioning their games. He visited less and less until he only went when his mother made him. Baldwin was too angry and there was nothing Konnor could do right and he felt awkward and worried and sad.

His feet still took him to the ruins — they knew the way so well — but it wasn’t the same without Baldwin. The place felt spookier. Lonelier. Colder. Silent in a way that breathed him guilty. The stories that had been so exciting felt empty and Konnor began to think that perhaps the hollow, too, was for babies.

He turned his back on the ruins and tried to forget the way things used to be.

Then one day, as his feet walked him by, he heard mewling. At first he wondered if those were ghosts come to haunt him … but the insistent whines sounded too much like complaints brought forth by small, needy, hungry, living things.

He crawled in. His torch lit an area of newly fallen stones and a squirming mound of furry wobbly creatures.

It had been heedless to enter face first into a den. He would have been taught a painful lesson by the parent, had she not been crushed under one of the stones. It couldn’t have been long. Her motionless form was almost warm.

The pups mewled and one wriggled to nuzzle blindly against Konnor’s palm, seeking comfort. It was only when he picked them up into his shirt that he realized something.

“The stories we told may have been for babies,” he told Baldwin when he unveiled the brown head of a pup that had snuggled into the crook of his arm, “but the dungeons seemed to have produced some real younglings.”

“And this one,” he planted the helpless creature in Baldwin’s withered lap, “needs someone who understands. Da says her back must have been crushed. Her hind legs are paralyzed.”

Baldwin’s eyes grew round and as he reached to touch the pup, she licked his finger. “I’ll call her Dungeon,” he said gently and his voice held a hint of sparkle. “For the way it used to be.”