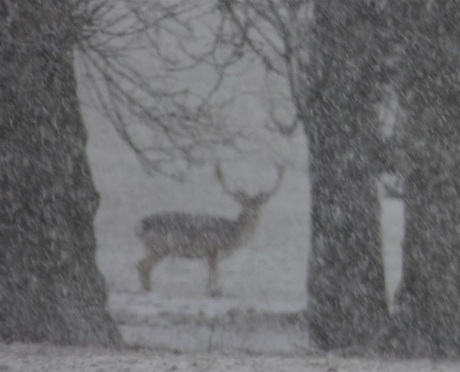 They didn’t tell him he’d be seeing things.

They didn’t tell him how cold he’d be, or how alone, or how desperately he’d miss even the smallest comforts. Like a hue that wasn’t on the scale of dirty-white to sort-of-gray.

Maybe he was dying.

Was this how it would be?

They didn’t tell him he’d be unable to speak. Or that the voice he’d make would go unheard, unseen, unnoticed.

The stag was still there.

Perhaps real, perhaps conjured by the wish to flee combined with the worry about antlers being helplessly tangled as one tried to get away.

The stag stood still. A statue. Another tree?

Then in one split second it bounded, disappeared.

Come back, he whispered. He’d never been so lonely.

He wept. He thought he did. He was so cold.

He looked at his hands. They blurred. He, too, must be fading.

The shadows crept near. A rumble of garbled monster-speech.

“He said he wanted to try some!”

“Yeah, but how much did you fools dump in his drink?”