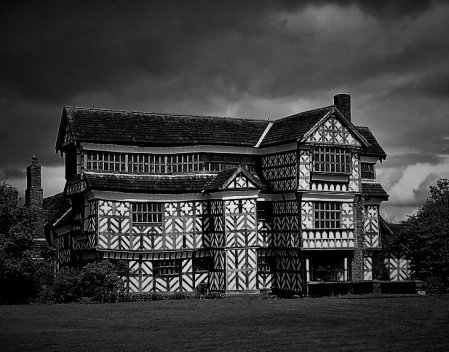 “All houses bow with time,” Agnes fanned herself. The heat lay on the garden like a leaded blanket. Even the shade of the great oak offered only small respite, though their stifling rooms would be far worse.

“Yet not all houses must endure an Edmund,” Joan giggled behind her fan before frowning at her serving-woman for daring a grin. That girl ought to learn her place! Mockery of Edmund’s evident over-fondness for sweets and mutton was for his equals only to indulge in. It would not do to have the servants ridicule their superiors, or who knows who they would dare disrespect next!

At least the obstinate girl had manners enough to blush crimson and lower her eyes.

“And may or may not last this one if he does not move his quarters,” Joan deadpanned but only with half-a-heart. Her wit was wilting. She wriggled two fingers and a woman stepped forward with a glass of mead and a linen square to dab the sweat off of her mistress’ forehead. Her own coif and underarms were dark with moisture. Joan sniffed the sachet at her wrist.

Insects buzzed. The minutes lingered. The house brooded heavy against the colorless sky.

“I wish the air would move,” Joan sighed. Her embroidery lay disused in her lap.

“I wish same.” Agnes’s ivory skin bloomed pink patches in the heat. Her needle, too, lay indolent. She gestured with her fan toward the horizon past the house. “Perhaps these clouds would soon shift the wind before them.”

A distant thunder rumbled as if in answer.

Behind the ladies, one of the serving-women squeaked.

“What is it, Marianne?” Agnes inquired, not unkindly.

“The house, My Lady,” the young woman’s curtsy was tense and her finger shook as she pointed it at the lattice work on the third story.

“What about the house?” Joan hissed. She found Agnes far too tolerant of serving girls’ dramatics.

A loud groan answered and the air itself seemed to shimmer. Or warp. Or weave.

Joan felt the hairs at the back of her neck stand on end.

Even before her thought completed, lightening split the sky and sliced the roof, the latticework, the heavy beam, the second story window, and the chevrons on the wall, knifing deep into the ground.

Another bolt seared her eyes as it hit the oak.

Sudden wind rose and the air fled, taking with it any memory of the burning house against the raging sky.

10 thoughts on “Warp and Heft”