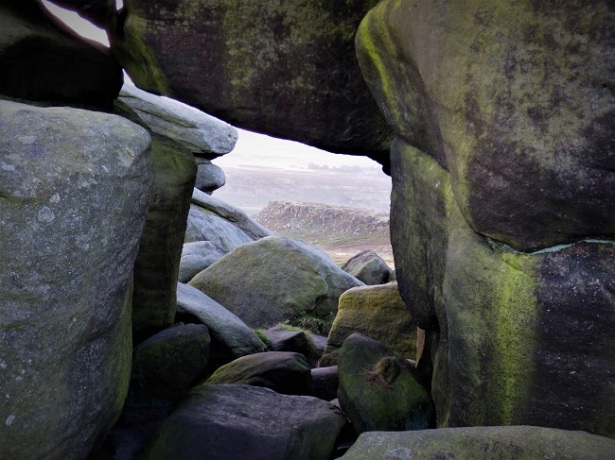 “I wonder how many had spent a night in this place through the centuries.”

Dennis looked up from his walking boots. The laces had knotted and he was adamant about untangling them without cutting, even though he had a spare. Mirna’s chin rested on a palm propped on an elbow, the remainder of her body already cocooned in her puffy neon orange sleeping bag.

“You look like a giant orange slug,” he smiled.

He gestured with his head at the space that sheltered them. The ancient stones still fitting together after multitudes of years.

“Yeah,” Mirna sighed. She turned onto her belly and peered out through the mossy rectangular opening. The moors stretched, bleak, to the horizon. As the day waned, the vista appeared increasingly forbidding. “I wonder who they were.”

“Shepherds. War refugees. Travelers. Hunters. Peddlers. Serfs. Messengers. Families seeking safety from the elements,” Dennis tugged on the knots gently as he spoke, and for some reason the controlled movement reminded him of the concentration involved in getting embers out of fire-sticks. He’d tried that once, out of sheer boredom, and the effort had left him out of breath, sweaty, and highly appreciative of the convenience of flint, not to mention lighters and water-proof matches.

“And now, more travelers,” Mirna noted. She rolled over and sat up in her sleeping bag, feeling very slug-like. “Here, let me.” She reached for one of Dennis’s boots, pulled out a hair pin and used it to loosen a knot, releasing one long loop of shoelace, then another.

Dennis shook his head and handed her the other boot. “So much for my skills,” he grinned sheepishly. “At least I know I’ll manage to light the field stove and make tea. Then we can watch the sunset, snug as bugs in a rug in our matching sleeping bags, and can be almost like all those who’d rested here before us …”

A whiff of wind puffed into the shelter and a straggling ray of light licked the mossy stone above Mirna’s head. A late-day cloud raced across the bog. A bird called.

A shudder traveled down Mirna’s spine.