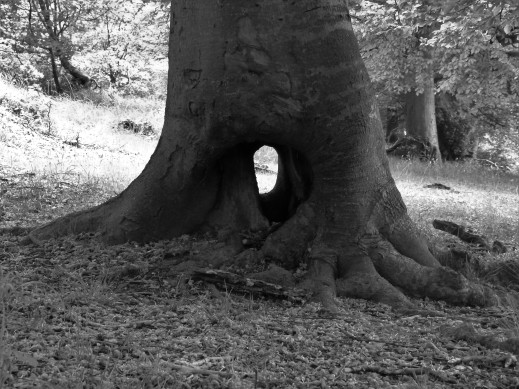 “It requires one step through.”

She squinted at the trunk. “I can see the other side.”

She circled the tree and peeked through the opening. “It is as I said. I can see your legs.”

“I’m sure you believe you can.”

His calm voice infuriated her, but she knew that getting riled up will only lead to another long lesson in teaching her self-control.

She turned away from him and breathed again and then counted to ten for good measure. She could almost imagine him chuckling, though she knew he probably would not give her the satisfaction of seeing him react that way. Still, she could feel his amusement. It had been the hardest thing for her. His mild dismissing mockery. It was a constant reminder that she was a mere neophyte swimming furiously upstream in hope of getting even the smallest measure of trust, let alone recognition.

Why did he take her on when he had so little regard for her?

She circled the tree one more time. In part to move some of her agitation, but also to use the trunk as some shelter from her mentor’s scrutiny. She knew what her eyes told her: A hole in a tree, a gap she could toss a pebble through (not that she’d dare, now that he told her what it was), certainly of no size to fit a person.

She also knew that eyes can lie.

In spite of herself she felt her fingers clench. She hated when he did that. It made her feel like a child to be goaded.

Perhaps I am not, she retorted in her mind.

Her eyes flew to meet his. She had suspected for some time that he could read her mind, and it felt like someone’s wandering hands rifling through her underwear drawer.

“I could read it in your eyes,” he noted, confirming rather than reassuring.

“What if I go through with it?” she sighed. She felt not so much resigned as she did defeated. He always got his way in the end. She could flail about and delay and prolong the path and belabor the process, but inevitably he got her to do things as he’d wanted. Half the time she thought his goal was to get her to where she would no longer resist him, while half the time she felt that the day she ceased rebelling would be the day he tell her that she’d failed completely.

Even now he did not answer till she asked again.

“You will see what there is for you to see.” He lifted his hand to indicate it was time for her to suspend all judgement, ignore her perceptions, and walk through the tree that he said was a portal.

“Is this the last test?” she fretted.

At that he chuckled. “It is never the last test …”

As she turned toward the tree she heard him add in a small voice that perhaps was made with mind, not larynx, “not for you, not for me.”

15 thoughts on “The Apprentice”