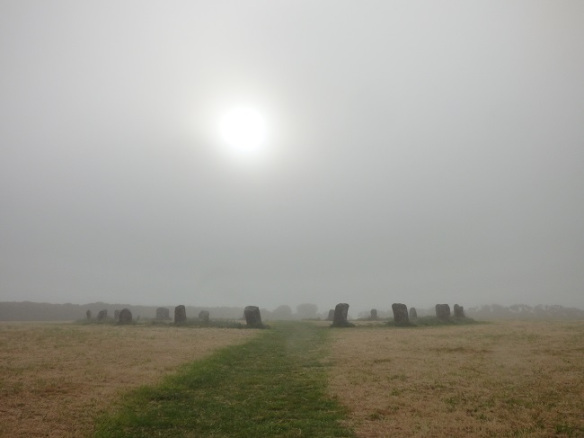 If only she could get there …

The mist and tears obscured her view, but she trod on, insistent and desperate for the safety of the circle. It had saved her ancestors. It had become a thing of lore.

But if the magic still held, she would be helped. The spirits that guarded the stones would weave protection over her. Bar the weapons. Shun the anger. Ward off those who wanted to do harm.

She tripped twice, the cold air breathing malice on her nape. She fought the urge to curl upon the damp ground and give up. She gathered up her tattered courage and wrapped the threads of memories around her shoulders. The incantations of her grandmother, sang softly into the cauldron, stirring soup and stories, teaching without telling, showing without spelling out what was forbidden to be known.

In the darkening damp she mumbled some forgotten fragments. “Help me, Nana,” she sobbed when her knees skinned on a stone and her breath caught.

“Rise, Child,” she thought she heard. She wanted to believe.

She rose. She stumbled on.

If only she could get there, she would be saved. The spirits will protect her in the mists of old.

The pitchforks. The firebrands. The mobs in their lust and calls for blood in smoke? They would not be able to see her. Not once she crossed into the circle. Once there, she would be scooped up, sheltered, danger gone.

18 thoughts on “Teaching Without Telling”