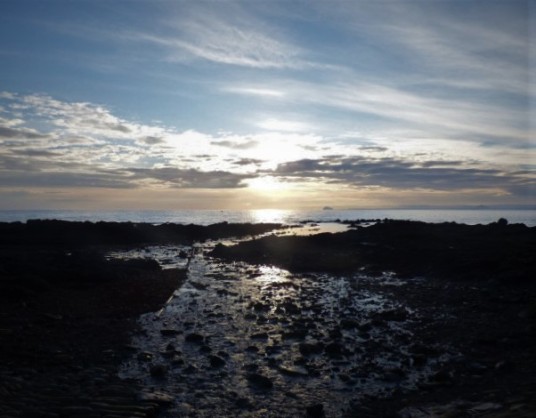 I looked around. Marsh and bog and semi-dry patches that high tide or rain were sure to turn completely water logged. It looked a misery.

“It will, too,” she added, even though I hadn’t said a word. She always knew to read my body’s thoughts, even when I voiced no words and moved not a muscle.

Some days it made me hate her. For my utter lack of privacy.

Other days I felt indebted beyond measure for not having to find ways to explain when words had never been accessible enough to match my thoughts with meaning. And for being seen by her when no one else seemed able to or cared to try.

“Wanna know how?” Fiona pushed a heavy lock of hair off of her eye and I knew then that she already had a plan, and that the plan was sounder than the muddy ground we stood on. I knew that gesture, that flowing move of clear-eyed determination that carried with it more than just a touch of crazy. For neither one of us was sane, but Fiona was nuts enough to get us out of scrapes I did not see a way out of. Somehow my sister, younger by three minutes and wiser by ten decades, thought ahead in moves others did not appear capable of anticipating. It had saved us, more than once, of certain death.

She was about to do so now.

She yanked a twig out of the soggy ground and scratched a diagram into the patch of godforsaken earth in the end of nowhere anybody, that an hour earlier I did not know existed, let alone that it belonged to us by ancestry through crumbling deeds that no one since an ancient relative had made use or taken any heed of.

“They thought the place too wet,” my sister noted as the outline of an elevated house rose like a phoenix from the lines she etched into the dirt. “But not Friar Felix. He saw the same potential that I see. The fish and clams and seaweed. The crabs. The cattails by the spring that makes the stream that gurgles out to the sea. A place to be.”

She glanced up at me and the hazel in her eyes reflected the sun’s rays along with something far older. Like a memory not of hers that nonetheless also held on to our own desperate need for belonging.

“I don’t know if he knew, Finley, but Friar Felix had bequeathed the deed to this land to his sister’s children, and to their children’s children in perpetuity.”

My sister turned her gaze onto the water and her voice dropped to a whisper in the wind.